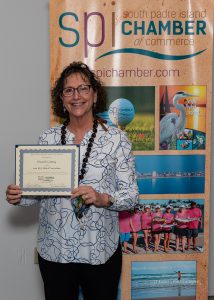 Each year nominations are received from chambers of commerce and cities across the Rio Grande Valley for recognition in the Rio Grande Valley Walk of Fame at State Farm Arena, sponsored by the City of Hidalgo in conjunction with BorderFest.  Nominees are considered for induction based on their life achievements and significant civic contributions.

The South Padre Island Chamber of Commerce nominated longtime chamber member and Island business owner Liz (Liz) Money to the RGV Walk of Fame for 2020. Money was selected for this great honor and was recognized at the official induction ceremonies on March 4, 2020 at State Farm Arena.

Liz, better known as Liz, came to the Rio Grande Valley in 1993 from Oklahoma where she worked at General Motors Corporation for 12 years, and opened her first Island business; Sea Sentials.  In 1996, Liz and her partner Diane Denson opened Ship Shape Clothing and Gift Shop. They further invested in the Island and built a large multi-use building on Padre Blvd which includes two business, one office, two apartments and seven garage/storage units. They started a shipping business called SOS (Shipping is our Specialty), which opened the same day the Queen Isabella Memorial Bridge collapsed, and later sold the business to an investor who operates this successful business today. Liz also owned and operated Sandpiper Gift Shop at the former Sheraton Hotel from 2004 to 2014, and the gift shop at Sea Ranch Restaurant from 2004 to 2012. Today, she owns a total of twelve properties on South Padre Island.

Liz is one of the Island’s, and Valley’s, biggest cheerleaders and advocates. She has invested her time, talent and financial resources on South Padre Island. She is a business owner, real estate investor and developer, and her personal philosophy, “to be a friend to everyone,” has made her successful, and has contributed significantly to the growth and development of South Padre Island. Her lifetime quest to “always see the glass half full” has been an inspiration to us all!

Liz views everyday as an opportunity to have a positive impact on those around her. In an effort to “give back” to our community; for 21 years Liz, and her partner Diane, in association with their business, have hosted an annual Fashion Show and Luncheon during Winter Texan Season to raise money for charitable organizations. The event has grown over the years from 40 attendees, to 345 in 2019. In the early years, the event benefited the local Humane Society and Animal Rescue Shelter, and for many more recent years, money and supplies have been collected for the Ronald McDonald House in Harlingen.

Liz’s commitment to her community is evident in her history of participation in both Civic and non-profit organizations. Liz served as a Director for the South Padre Island Chamber of Commerce from 1999 to 2007, and as Chairman of the Board from 2003 to 2005. She volunteered many years for the Chamber’s Ladies Kingfish Tournament Planning Committee, the Chamber Gala and Scholarship Fundraiser, and was very active in Chamber Membership Drives. Liz believes strongly in giving back to our community and supports the mission and activities of many local non-profit organizations, including the Boys and Girls Club, Boy Scouts Adventure Camp, Walk for Women, and Friends of Animal Rescue just to name a few.

Liz graduated from Oklahoma Baptist University in Shawnee, Oklahoma, and completed her Masters at Oklahoma City University, Oklahoma City. She is a 1999 graduate of the South Padre Island Chamber of Commerce Leadership Laguna Madre Class III.  She received the South Padre Island Chamber of Commerce Kukui Leadership Award in 2007, and in 2010 was recipient of the Chamber’s Directors’ Award. In 2010, Money’s business was the 1st recipient of the Go Green Award for significant actions taken to be environmentally friendly.